Kiera is a twelve year old beautiful and free spirit living with CDKL5 deficiency. She lives at home with her mom and dad, and sometimes her equally free-spirited grandfather, who is her best friend and partner in mischief. There’s no one she adores more! 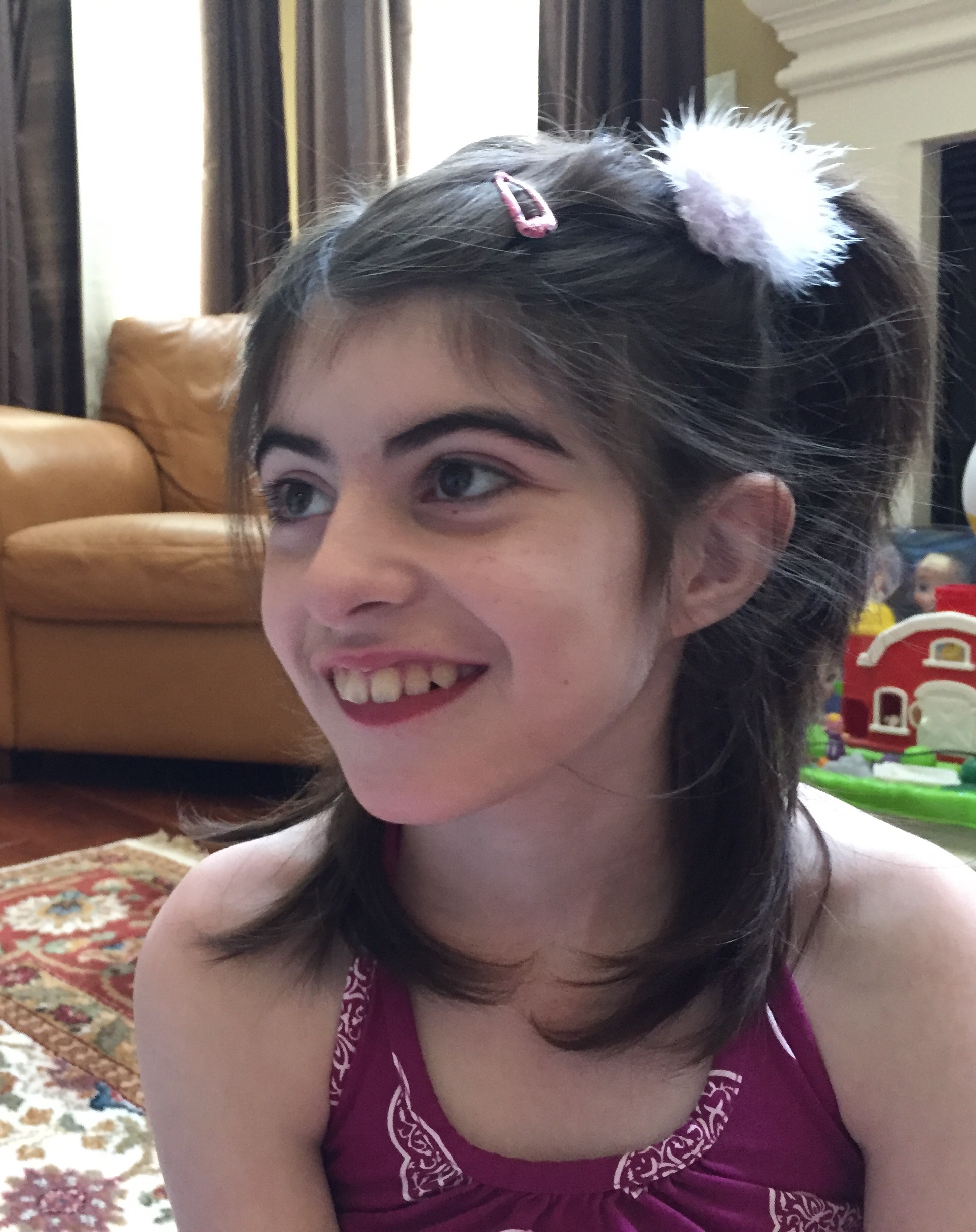 To be with Kiera is to be in the presence of pure love and grace. Her beauty reaches deep to her soul, and she loves to be around people. She loves to look them straight in the eyes and study their faces, and then cuddles up next to them. She has an incredible smile and infectious laugh. Kiera knows what she wants, and what she doesn’t, and isn’t afraid to tell you. Emphatically. Her spunk, strong will and perseverance has served her well, and makes me so proud. Kiera knows she’s more than this diagnosis, she has a heart, mind and soul that is rich with experiences, emotions, opinions, likes and dislikes, hopes and dreams. She is a gorgeous spirit to behold. She laughs loud, sings beautifully, loves opera music (the tenors in particular), Christmas songs, Adele and Beyoncé. Kiera loves the ocean waves, the night sky, blinking lights, bubbles, books and dolls. She loves riding trains, carousels, and petting horses. She loves dogs from a distance!), and loves to lay in the grass and feel the coolness against her skin. This is who she is now. It has been an incredible journey to get this point in time. We constantly live on the edge of the devastation that CDKL5 deficiency has caused and we dread the possibilities of things getting worse for Kiera. Yet we are in awe of the incredible world of rare diseases we have become a part of, and the people and families affected, and we are inspired by the resilience, determination and strength of the human spirit.

Our lives were irrevocably changed when Kiera had her first seizure when she was just two months old, and suffered daily seizures for the first year of her life. She was on many different medications that first year, but nothing helped. Finally Kiera seemed to find relief with phenobarbital, keppra and Lamictal, and she had an apparent honeymoon period of 18 months with no visible seizures. What we learned later was that she was probably still having sub-clinical seizures, and we simply didn’t recognize it. Genetic testing was performed on her sporadically those first few years, all with negative results, and eventually her doctors determined she probably had atypical Rett Syndrome. However, in 2008, Kiera’s doctors sent her to the Cleveland Clinic because they had never seen a child like her, and they wanted a 2nd opinion. It was there we received the official genetic diagnosis of a mutation on her CDKL5 gene, a nonsense mutation on exon 18. She was three years old.

Since the initial honeymoon period when she was a baby, Kiera has never been seizure-free. We’d have days (even a few weeks) without seizures, but eventually her seizures became daily, and completely intractable. That is still true today. She has been on over 20 different anti- seizure medications over the past 12 years, either alone or in combination. She tried the ketogenic diet without success. She had participated in the Epidiolex clinical trial and was on CBD oil for one year. This oil helped her seizures more than any other medication, but she suffered intolerable side effects from the CBD and so we had to take her off. We are in the process of enrolling Kiera into a clinical trial of a new anti-seizure medication.

Along the way, Kiera has continued to grow and blossom, although at a very slow pace. Many consider Kiera “high functioning” for CDKL5, but some days it sure doesn’t feel that way. We never like to say she is physically or cognitively impaired, just delayed a bit! She is always making slow progress, which we celebrated with sheer joy and pride with every inch stone. With intensive physical, occupational and speech therapy, Kiera learned to go from sitting to transitioning to her hands and knees, and when she was two years old, she started to crawl. Over the next 13 months, she gained core strength, learned to tall kneel, pull up to stand, cruise, and finally, with sheer perseverance and determination, Kiera took her first independent steps on Christmas Eve 2008, just after her 3rd birthday. Her world opened up after that milestone, and she has been building on those skills ever since. We continue to maintain her aggressive therapies to keep her skills strong, and to learn new ones. Kiera also has good use of her hands and can feed herself with a spoon or fork, but needs some assistance, and she can hold pencils and crayons, turn pages in a book, open doors, and many other things that highlight her fine motor skills. Kiera can communicate in many ways, including talking, sign language, and a talking communication app on her iPad. This last one is a work in progress!

Other therapies that Kiera has taken part in include Hippotherapy (very helpful for her core strength!), music therapy, dance/movement therapy, ABA, intensive OT and speech, feeding therapy and sensory therapy. She continues these therapies even to this day, although we take frequent breaks in between.

Unfortunately, like many children with CDKL5, Kiera suffers from other challenges brought on by this genetic disorder. Kiera has CVI, but very mild. She has many GI issues, including slow motility, constipation, severe abdominal bloating and pain, and eventually failure to thrive. When she was eleven years old, she required a G-tube. The G-tube has helped in so many ways, and she no longer has severe pain or bloating, and she has gained weight. She looks healthier, and we can keep her fed and hydrated when she doesn’t want to eat orally. Unfortunately, the G-tube surgery made her reflux much worse, and we are working on that issue currently.

Kiera also has anxiety and several features of autism. She paces constantly and can’t seem to sit still. She fixates on objects, and has repetitive behaviors. Very recently, Kiera started to breath hold, and her lips turn purple. She has never done this before and it’s a new and frightening symptom that we’re figuring out. We don’t understand why, and she has been evaluated by a large team of doctors to help sort through these concerns, but we don’t have answers yet.

We are lucky in that Kiera tends to sleep pretty well, and wakes up with a smile every day!

Kiera goes to a regular public school, she is currently in 6th grade. She is fully included with the general students, but she has a one-to-one helper with her every minute of the school day. She can’t always keep up with her typical peers, so she spends some time in the special ed classroom to work on subjects at a level more appropriate to her cognitive strengths. Kiera mostly loves school, and her favorite parts of her school day are reading with friends, lunch, music, choir and band (Kiera plays the bells), and of course, recess with her friends. Sadly, Kiera spends much of her day at school in her wheelchair because the school is worried about safety. We make up for it at home, because she has complete freedom to walk and roam and play inside or outdoors without her wheelchair. One of her favorite outdoor activities is riding her 3-wheel Freedom Concepts trike. Purple of course!

Kiera has, or needs, a few other pieces of equipment. We have a wheelchair in case we’re out and about and she has a seizure, she has a car seat, and we are waiting on the delivery of an activity/feeding chair for home so we have an extra level of safety during meals when needed. Kiera has a protective helmet for seizures in case she falls, but she refuses to wear it. It causes her great distress and anxiety, and so it’s a decorative contraption on a shelf in her closet! We are close to needing a lift for Kiera to help transition her from bed to bathroom in the mornings because her muscle tone is extremely low upon waking up. She’s very floppy in the morning and we have to carry her until her body wakes up. Kiera is often unstable in her walking due to the high burden of seizures, and so I often wish I can wrap her in bubble wrap! My heart breaks with each bump or bruise or fall. We all do our best to be her human bumper car, but it’s impossible to do 24 hours a day.

This is a brief snapshot of Kiera Grace, and her life living with CDKL5 deficiency. We are working hard to find treatments and a cure for her and all children affected by this condition. We will never give up hope!